Banks and financial institutions are largely dysfunctional and rather serve to incapacitate the weaker instead of giving them a chance to step up.

The idea of credit and interest rate as we know is not only dead, it lives as an undead perverted version of its former self. Banks and financial institutions are a thing of the past, with not only their resources, which are supposed to serve as their backbone, securing users funds, being vastly depleted and misappropriated but they are also morally bankrupt. To say it with the words of Dr. King: “We refuse to believe that the bank of justice is bankrupt.”

Ask God to move a mountain, be ready to wake up next to a shovel. This shovel is Social Mining, running on several top 100 projects in blockchain aiming at the betterment of the industry. Fostering a philosophy of equal share with opportunity distributed to people who actually partake in the upbringing and nurturing of companies and products.

We have a dream that one day the Blockchain industry, the technology we all love and believe in, the technology that is and will continue to change the world makes good on the weakest of us. Make the little man thrive. Bitcoin was introduced as a means to even the odds after the housing bubble in the US took a toll of 8 million jobs with 6 million people left homeless living in cars. Small investors lost their houses in the process before the crisis swapped over to the EU recession and from there creating impacts we still feel today globally. Who stood trial, 1 person not even being in the circle of main culprits. The idea of opening a bank with 5 million of own capital and loaning tenfold from central banks at 0.01% is outdated. It served to build up economies after wars and after colonization benefits fell through. FRAPORT, the EU’s biggest airport network but a German company by default, owns 14 airports in Greece alone, controls pensions funds and is able to restructure governance of countries. The shift from bilateralism, i.e. the Cold War, to Unilateralism, the dominance of the US, and finally to Multicorporatism means we replaced one evil with yet another.

The open economy, the way Adam Smith and Locke envisioned, is dead. Replaced by greed of the few companies ruling the world by their ownership.

This injustice is incomparable in contrast to the injustice African countries experienced by the hand of colonizers up to this day. Except that some of the countries were replaced by multinational conglomerates such as Nestle etc., who make use of agreements such as the GATT, allowing for up to 95% of countries’ produce to be exported to their former captors. Agriculture in the Western world is not sustainable, subsidies exceed 50%.

Take the CAP, Central Agricultural Policy, taking the largest share of the EU budget to sustain farmers. Take the so-called concept of sustainability, which is admittedly a joke. Take the idea of sustaining the Fishing Industry.

A buzz word used to appease and reassure the people that we are actually trying to save our oceans and our environment in a struggle that bureaucrats cannot win. However, technology can and we need to advance in order to sustain.

Social Mining as the Vehicle of the 4th revolution!

Well, the 4th revolution is here. Only 100 years after the main kick-off of the 3rd wave and 50 years after China allowed their companies to keep production quota surpluses in order to break the cycle and create a communist-governed capitalist empire. However, this empire runs on American Dollars.

Asian economies, similar to the African and South American industry conglomerates, rely on the Dollar, often pegged to their native currencies. One picture is the same scenario we experienced in the mid to late 1990s, American creditors pulling out their investments in order to maximize gains, governments defaulting, stopping the printing of bank notes, starting with the default of the Thai Baht and sweeping over to all other nations.

This is what kicked off the industrial crisis of the 5 Asian Dragons, where countries ended up paying a multiple on their debts in their own inflated currency. This has led China to amass the biggest dollar reserves in the world to keep their exports notoriously cheap and labour costs low.

A good single-use case is the 1992 breakdown of the bank of England made possible by greed and false motivation to have their national bank’s model transferred to what became the European Central Bank. The ambition to create a strong currency with a minimum of inflation and spread, allowed Soros and his pals to massively short the pound and cash in billions.

The counterpart is the Zimbabwean hyperinflation that was made possible by the misguided ambition to nationalise and chase the driving economic forces out of the country.

The balance that is required to protect the small user or working class is not achievable in our today’s society with decreasing growth and negative interest rates. The golden 20s were 100 years ago. It’s over for them, blockchain can regulate, balance and ultimately ensure more equality. One can only imagine the perverted ways Banks will seek out in the future utilizing crypto to drive their interest rates, creditworthiness and solvency and how they fail to see the bigger picture. One example of this simplicity and hunger for easy gains with a minimum of technological knowledge are Bank collectors' coins.

This struggle will be fought on the back of the small worker, we don’t have this. Social Mining is and will continue to balance this injustice and even if it’s only a grain of sand in the hourglass of our world economy, it is a step in the right direction.

We Have a Dream (Inspired by Dr. Martin Luther King Junior) 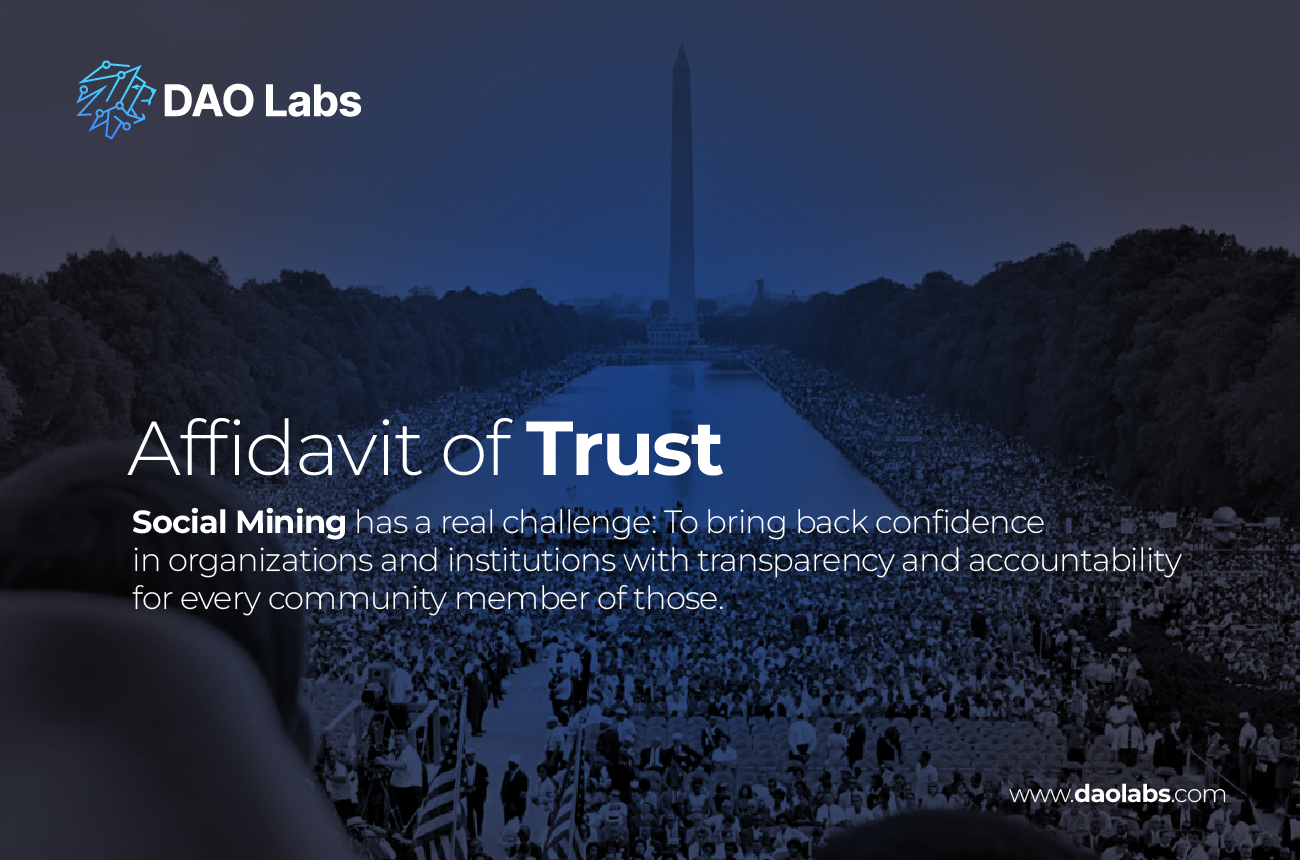