The NEM Blockchain is one of the oldest projects in the field and until today stands as one of the most successful examples of social mining as a community approach. In terms of interaction, awareness, confidence, transparent governance and trust, NEM Hub brought to this blockchain community a lot of benefits that settled the path for further development in its ecosystem.

In this brief article we´ll talk about what NEM Hub brought to this blockchain to show the bright possibilities the social mining template can do for projects and people involved in those.

But first let's give an overview on social media and their impact in brand awareness for these kinds of projects.

From Group to Community

Even though it sounds like an oxymoronic claim, social interests need a little more organization in social media terms to bring value. We must keep in mind that common interests won´t be organizational nor functional subjects to become a motivating force by themselves and will need a little push to achieve that.

Massive global numbers in digital interaction won´t stop growing and represent a consistent sales tool. Social media users gather around interests and sometimes conversations spark among them. Eventually, someone catches it and tries to drive the conversation and capitalize points to keep things in a certain order, which gives path to a basic set of rules to keep people talking in a nice environment. Then, proper Organization begins to occur.

For more informed and skilled members, this transition will be easier to implement and enjoy while others may see this as a hint of an early and necessary governance. Otherwise, every group would be a whining racket.

When every of these advanced members, or Admins, work in turns, share surveying and help, and set an agenda of issues to deal and discuss in a chat or discussion space, they establish the standard for public attention that brands media call Audience and brands call Fans.

Brand and Community in the NEM case

Is it possible to have Audiences or Fanatics without a bit of organization? Yes, and this is usually provided by the channel, which it is, in this case, the social media platforms.

Being among the three top crypto projects in value, only topped by Bitcoin and Ethereum, by the time its crypto asset was available to trade, NEM was a giant infant with thousands of curious and eager fans around the world -way mostly in Japan- who were paying attention to the smashing hot XEM and what would NEM do to catapult its value.

Different ideas and technologies arrived to the Blockchain scene and NEM went down in the cryptocurrency rankings.

Security flaws in the Coincheck Japanese crypto exchange caused a major XEM theft, and subsequently a tremble in the holders´ confidence in the NEM token.

There were claims in the forums that the community, XEM holders and such, would leave the project as well putting at risk the launch of the next blockchain iteration of the NEM Ecosystem, Symbol.

Initially called Catapult, Symbol was the top priority development for NEM Group, the governance agent at that time. It had several delays and changes, hurting the community's faith in the project, as well.

By early 2020, started to operate and helped the NEM Group Marketing Team to push the community to rally around Symbol through promotional waves like task performing and, generally speaking, being compensated for their faithful support to NEM by providing a community service to the ecosystem.

Once on board, every NEM Hub member could perform posting, creation and even developing or reviewing tasks and got paid in in exchange for that community service they were providing.

They were asked to stake a XEM amount within the platform, a simple process that involved adding a NEM Wallet to the platform and keeping -or increasing- the XEM amount in that wallet. The platform members had a weekly workdrop and many of them did not collect it, but re-staked that payment as inversion instead. That XEM increasing mass became the first real staking pool of the NEM Community.

In the first few days, NEM Hub onboarded near a thousand members, with 100 million XEM (an equivalent value at that time of some $6M) staked, with almost 500 submissions to the team requested tasks, some 3K tweets & retweets that generated around 2M impressions and 50K engagements.

By March 2021, an equivalent record sum above the USD 120 Million in XEM was staked. In this specific case, the Social Mining template allowed participation and benefits for a community that demanded action through integration.

Social projects are made for people. Interaction is a two-way road. The global NEM Community had a strong network of regional Language presence with a great hierarchy of Admins, but even so the NEM Hub assimilation meant an important leap in interactions and engagement.

As for financial terms, NEM Hub's XEM staking pool did a fine job and made NEM Group to consider how important the community trust was.

At the moment, accomplished the mission and it is under DAO Labs custody. Some old users, used to the Social Mining template, keep hope for this blockchain community to retake this template and want a comeback.

I was a NEM community member at that time and had never seen some push like that.

It was the first time, outside Japan, that the NEM Community was able to use User Generated Content (UGC) in their own accounts to engage with -and for- NEM, with a massive notable outcome.

It basically helped to bring stability to the XEM, confidence to the community and the right kind of environment for the developing team to keep working on Symbol.

Social mining really works, for projects and people, and it is possible that it would become the norm for social media to cope with a vast mass of content and unhappy users. It is all about giving something back to the supporters and contributing to stop VC predatory practices.

No matter what a project can innovate or try to achieve, it is through interest communities, focused on sharing UCG and providing the governance agents with vigorous social surveying practices that real value is built. Together.

In deregulated and decentralized scenarios, the key feature for Social Mining is the provides a framework for groups to join forces to work and get compensated with fairness and based on merits and a well-done job.

And that's precisely what DAO Labs does. 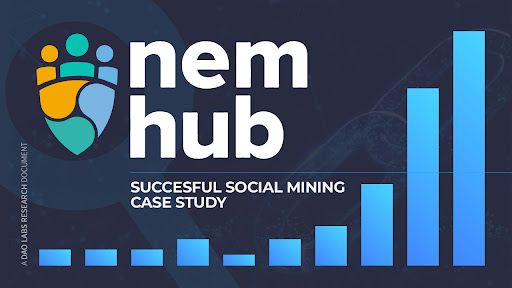