Although the crypto world exhibits the most compelling technologies of the Internet era it mirrors the real society in money and work terms, but in both features -functional and economical- it still must face tough challenges.

Maybe the one of the hardest is to make salaries to cope with the grasping inflation and speculation in almost every country. Social Mining is a proven way to organize work and reward collective actions, and yet can be even more upgraded to provide alternate components in its framework and assist the Social Miners of a community in getting a little extra from their workdrop income.

Is Social Mining compatible with Staking?

There is something in the word currency that makes everyone think about a community. It is simply because a currency, as a value representation, or token, is the most convenient Way for attained value to be traded, exchanged and stored. Hard work and trust are undeniable ingredients for a society to raise, but not without translating their outcomes in some kind of currency and establishing boundaries, or rules, to keep things in an orderly fashion.

A Social Mining platform is precisely about work and trust. Economics play the cementing role in the structure alongside rules. An organized community generating and sharing contents to assist value building in a collective way, guidelines are a basic staple to help consolidate a structure, and eventually economic terms appear in the equation to extend -and represent- the accumulated collective value. That's how it becomes attractive and valuable asset.

This is not a simple or quick thing to happen. All of what’s involved in this pave the road to self- regulation for a healthy economy and auto-governance for collective decision making, both cherished and necessary characteristics for a digital organized group to thrive. To have those components partly working would cause everything to collapse, people to lose hope and economic resources won’t make any difference.

And no free society -nor economy- survives a constant incoming flow of cash (ramping inflation), work with no fair remuneration (our modern-day slavery) and disabling people of savings or investments resources (cancelling financial freedom). These are real guarantees of progress.

Main economic theories put Capital on top of work and resources. Historically speaking, the 04 major legs of a production table have been capital, land, labor, and entrepreneurship. A fifth leg for that piece of furniture would be sustainability, based on community´s trust, and that’s where Staking could be a good Social Mining ally in the quest for fairness and work incentives.

What’s in Staking for a community project?

Very much, actually, but let's dig into that. Working to get money is a thing while getting enough money to operate is a different story. That’s why we should talk a little more about liquidity.

Raise fundings is crucial for every project to prosper. Facebook, for instance, got an initial major push from Peter Thiel right after getting its first million users. In that case, money came from one individual, but many can gather to make an investment pool with the same results. And regardless of numbers or equity, investors demand profit under their conditions.

As soon as people buy a token during the primary stages of a crypto community project, investing in specific stages of its roadmap, sometimes they get the right to obtain a specific amount of free extra tokens as an incentive. Is not unusual that they get them for free just for performing a set of activities involving promotion of both the project and the token to be known, gain popularity and ultimately pump its value.

Without liquidity, projects simply cannot pay for development, promotion or basic resources to reach goals and stick to a roadmap. Airdrops are a common practice to attract investments to get funding by almost every means available while Social Mining’s workdrops reward project communities’ collaborations.

A crypto airdrop is a method by which you can participate directly in a new crypto project earning free tokens from the project. It is a basic and well-known promotional tool, although the alternate and undeclared value for that formula lies in making the investors hold the token for as long as they can.

·         Providing liquidity by investing the project’s token into liquidity pools

·         Using the token in internal applications of the project, just to give it vitality

·         Participating in the project’s governance through voting

·         Trading project’s token for others in any decentralized or centralized cryptocurrency exchange, and…

·         Staking the token right from the start for profitable APRs, in case this feature is available

Is Soft Staking a Social Staking?

For freeloaders, an airdrop is a dream come true with tiny prints at the bottom. They get assets but they are usually invited to re-stake those in a platform, freeze them during a period with a promise of those getting more valuable in the future. Meanwhile, projects’ owners get the liquidity they need. And sometimes the holders are later invited to buy more assets, as an investment opportunity, and if some of them buy these assets of course that will have an impact on the overall price.

The traditional staking solution demands locking assets. People lose track and control of them when that happens. A common malpractice is for the projects or staking instances to make other use of these, or steal them.

Now, Social Mining is a structure that compensates communities for posting collective and individually tasks or activities during a Workdrop period. Compensations are paid in a fiat-based stablecoin like BUSD or platform tokens, so every participant can take away their earnings if they want or, in cases like DAO Labs’ Polygon Hub Soft Staking Program, choose to re-invest in the project, helping it to bring liquidity and, therefore, keep the ecosystem value stable.

In contrast to other Staking solutions, the Soft Staking Program provides users extra means of income while they have full custody and control of their funds without the risks of being stolen. And that's a security reason enough for any decent working community to choose.

Users just have to link their non-custody wallet and the automated system takes a daily snapshot on the funds, without moving or locking them, to calculate the soft staking reward, which normally is made every end of the month.

Staking is far from becoming an alternative to a savings bank account in the strictly legal point of view, mostly because of local laws of every country, but the Social Mining Soft Staking approach really raises the bar to make this gap closer. It encourages social miners to get a little extra for what they worked and care for.

It is clearly a more elegant and necessary solution for people, projects and ecosystems to work together in fairness and transparency. 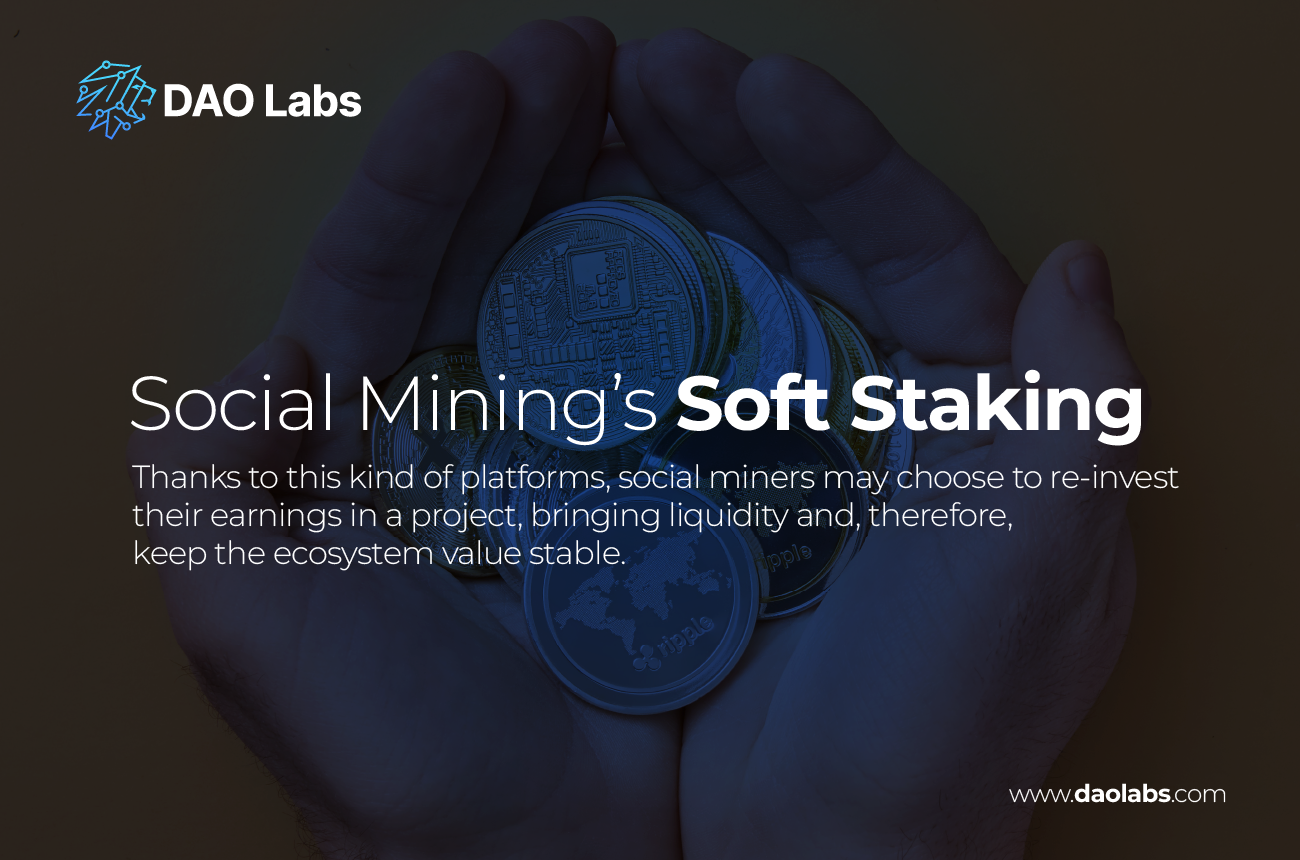