The month of December passed as quickly as it came. With holiday season across the world coming to an end, it’s time to take a closer look at some of the most exciting developments within the community hub, while also taking a moment to celebrate some of the most active, high-performing, creative, and ingenious members!

Towards the end, we will also break down some important stats, so that you can stay up to date on the most recent performance of the platforms.

For the Exclusive Video Task, the user with the handle @nelsoninno received 800 points and 0.5 reputation. With this, he managed to surpass Cezip with the Battle Video meme.

In this category, it was the user Michelle2019 who managed to outperform everyone else and earned a total of 8270 points, increasing the reputation by 0.9.

Michelle remains a leader in the DAOVERSE. For December, however, the best performer was @ipek with 4557 points.

For Polygon Hub, the best Social Miner was @marpaci with 7528 points and 0.15 reputation.

Social Miner of the Hour

Maria, perhaps better known as Bossmadam, is one of the Social Miner of the Hour. We managed to get in touch with her for an interview and she shared some really exciting things on what Social Mining means for her.

“Social Mining for me is a community-driven project that unites various people with different kinds of skills and talents that they can enhance while contributing to the growth of the community.”

She describes it as a win-win situation “for both the Social Miner and the platform.”

What is perhaps even more interesting is her views of how it can help bring the best out of people:

“I believe everyone in this space has their own unique talents, I can see the benefit of this platform to each member in terms of providing a safe space for everyone to showcase whatever talents or skills they have.”

To cap it off, she also brought up the obvious but massive benefit of social mining:

“Plus the fact that they can get paid based on their work - a great deal indeed! This is the first time that I encounter such projects, really great!.”

Maria also shared that the Battle of Nations was one of the most challenging tasks that she had ever encountered, but still finds it great and clever that the team came up with the idea of competing with three different nations.

“For me, BoN is not really a competition, it is more about knowing if you and your teammates are uniting for your nation. I was really amazed by how the team came up with this kind of idea, it was truly genius and helpful.” - She said.

Last but not least, we also can’t miss Karen Jane (@jiahjee), who also performed extremely well during the last month of 2022. We managed to get a hold of Jane, who shared that it has been a goal and a dream of hers to be named Social Miner of the Hour when she was starting out.

To those who are just starting out, she gave some excellent advice:

“You just have to focus on your goal and make it a habit. Every decision is your choice, so choose which best fits you. Believe in yourself and, most importantly, be thankful…”

The best designed for December was the user going by the Twitter handle @eharmanli.

We got the chance to speak to him, and he shared that he got into crypto about seven years ago, through mining.

He is now trying to improve himself in research, development, and the application of blockchain and crypto-based projects. He takes a more practical approach and loves to constantly learn new things.

In our interview, Erkin gave an advice to future and up-and-coming designers:

“You need to do a lot of research. Especially now, it’s very easy to access educational videos, and it’s also very easy to get information. Good designers must be followed. Understand the projects well and integrate with the projects.”

The user @MetaversJR surely deserves an honorable mention here. His work was also excellent and he came a close second.

Best Soft Staker on all Platforms

Soft-staking is an integral component of the Hub and the one to do it best across all platforms was the Polygon Hub user Femiyoghurt.

With the recent launch of Kava Hub, though, DAO Labs also introduced a new soft-staking mechanism based on a relatively straightforward principle: by keeping the earned Hub Points on the platform itself, users are now able to build up their reputation and boost numerous abilities, such as getting larger rewards.

That said, the best soft staker on all platforms is @anmolgaur.eth with 42.408 influence.

The Most Active Social Miner

As mentioned before, Social Mining is essentially a multi-chain community building approach and governance ecosystem that consists of numerous areas and entities. It’s also the core product of DAO Labs’ software suite.

Through Social Mining, it’s possible to harness the power of the community, reward it appropriately, and contribute to organizational growth through a DAO structure that’s functioning on a merit-based system.

With this said, the most active social miner for December is @VickySinXD who is also the most engaging Twitter user, generating 17,623 impressions and 3959 engagements from 34 tweets.

@Michelle2019, on the other hand, is the most engaging Twitter user since the platform launched with 14682 engagements from 162 tweets.

Now let’s dive into some stats.

The total user count reached 23,846, harboring a total of 547 active users in December.

In December, members submitted 890 entries, bringing the total number to 3446. The total tasks stand at 34, 5 of which came from the same period.

The Social Mining platforms have harnessed a total of 9331 tweets so far, with over 2190 from them coming from December. The total retweets for this period stand at 3954, while the total impressions hit over 2 million. It’s worth noting that the platforms has garnered over 4 million twitter impressions so far and about 449,968 engagements.

Of course, 2022 is important for DAO Labs, the DAOVERSE and Avalanche, Polygon and Kava Hubs communities, since all of them were created this year, but by the end of Q1-2023 DAO Labs and DAOVERSE will have their first Birthday! Once this cycle is complete, we'll be celebrating the first Social Mining full year and -Spoiler Alert- making special presentations, activities and handing out the best performance prizes.

Keep an eye on our social media channels to get more information about this great celebration that the DAO Labs Core Team is already preparing for the Global Social Mining Community of our platforms.

And to wrap it all up, we once again turn to our interview with Bossmadam, who said it like no one else:

“Studying things in crypto is not a piece of cake. However, if you set your mind into it, nobody can stop you.” 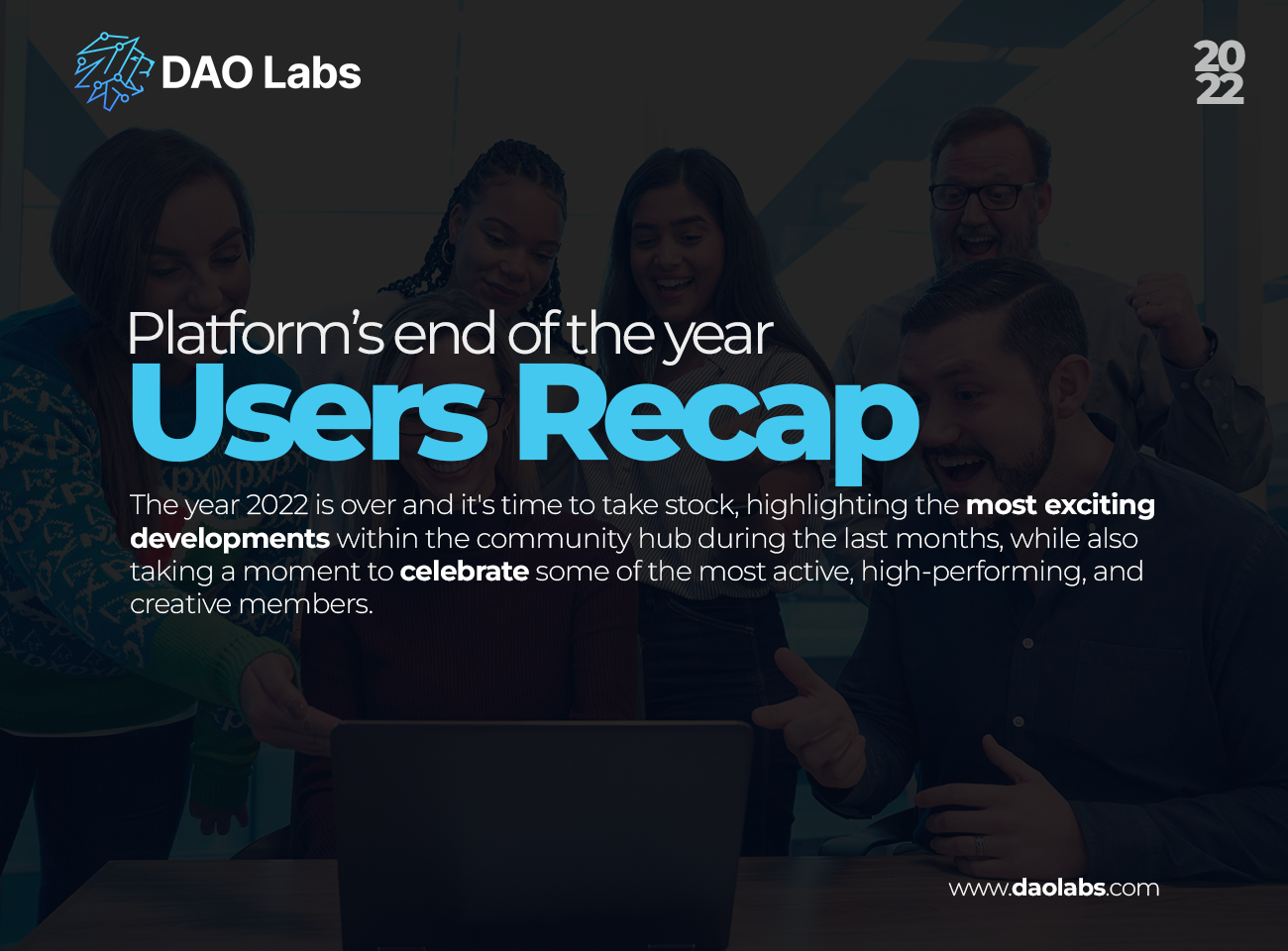