The third workdrop is complete and we are finalized the reward distribution. Once again we devoted more than half of the budget to favouring the less active Social Miners. The most active users have better compensation, and their consideration keeps consolidating in the platform for upcoming ILOs and new features.

Workdrops describe the payout mechanism on Social Mining, allowing the project team to reward their token holders who add value to the project’s ecosystem growth. Workdrops are activities we encourage our community members to perform and that we reward accordingly once we evaluate and consider valid contributions to the project.

Our Alexis Trujillo, from the Marketing team, interviewed Malte Christensen CEO of DAO Labs, who told us more about the project and the functioning of the DAOVERSE Workdrop.

DAOVERSE has 20K active users. How do you feel about it and What does that mean for the project?

“It’s just another step on a long road. Overall, as a team, we are very happy and grateful seeing our community earning actively on the platform and enjoying the work and reward mechanism.”

How does the workdrop system work? What did DAO Labs want to accomplish with this?

“We have two gateways of rewarding users. One is the marketplace where users can redeem their points from a certain reward height ( f.e. 3000 points on Avalanche’s Social Mining platform community.avax.network). The other “classic” variant is the workdrop, weekly or monthly. The workdrop is our standard reward mechanism and a filter, if users are disciplined enough to continuously (not just one day) work and bring their skills to good use, they will receive a healthy reward. Next to the individual skills we incentivize users to monetize their social media and establish a second income stream. With users taking it seriously, a routine sets in and they can adopt the work they prefer as a long-term arrangement for stable coin, allocations or top 100 coins as means of compensation. What do we accomplish, users get rewarded based on the merit of their work, not ending up at the bottom of the food chain making a fraction of VCs, KOLs and influencers. They deserve more as they are literally more important than the leech VCs populating most project’s cap tables. Also, we are trying to combat this toxic work investment culture that VCs established in crypto, leading to more failures, unrealistic gains, overexaggerated evaluations and shortsighted vesting flexibility. At the end of the day, does crypto really need VCs? Are exchanges really fond of VCs, no they value community a hundredfold more.”

You mentioned above that the Workdrop is also a filter. So what does the Evaluation Team expect from the Community Tasks?

“Skill acquisition is paramount, if you don’t understand how to do something, ask us, there are very capable people in the community. Nelson, Ray, Sicilian, Albet, Amara, just to name a few. These people act like guardians, on Social Mining, we call them Ninjas. Ask the telegram admins for help, people in the team, and admins on the platform. We want to help you grow and establish a second income stream that is beneficial for you and for us. It needs to remain an economic win/win to stay feasible.”

Some DAOVERSE members were awarded with more SMPs than others for similar submitted tasks. Why was it? What is the more valuable content about?

“As of now, we have not enabled community voting on tasks or contributions. That means there is always a level of subjectivity to it, as the admins are the sole validators. The short answer is, content should be original and funny. Crypto breathes pop culture, ideally, the user’s content is rooted in his or her own history and experience in crypto. Well-paid tasks often require time and certain skills, so we expect the users to self-educate and learn on their own time to earn more in the future.”

What would you say to the platform members who feel it is hard to achieve the 50 SMP limit to be eligible to collect the reward?

“Frankly, I would say that it is not hard at all. There is value in almost all contributions and some people just need more time to acclimatise and start using the platform efficiently. Part of our goals includes making the system more accessible and less bulky. Just by submitting easy tasks such as content or design (meme/infographic) or participating in the Twitter program and making this a routine. Users who don’t have a minimum of 100 followers usually manage to reach this threshold by communicating with other Social Miners on chat in just a few days. If you look at the last reward/work drop where users above 1000 points earned 150 BUSD, I feel we compensate fairly.”

What can we expect from DAO Labs in the short, mid and long term?

“First, rolling out the platforms we have in the development pipeline. After we have completed the Social Mining AVA HUB migration, we look at the soft launch of Polygon HUB next week. Then KAVA, Hedera Hashgraph, QTUM among other top 100 coins that are also on the table for this year. 2nd, we work on improving the user experience for V1 as it will carry the ILOs in the future. 3rd, V2, the idea of collective user percentage yield ( CUPY ) over multiple platforms. In essence, it means branching out into a universe of merit-based rewards. To illustrate, if Polygon rewards users with 15% APY on their staked assets, we can offer up to 50% APY since the user pays for himself by returning value to Polygon over his Social Media or by participating in the growth via his/her skills in tasks/activities. That means the user is green on the balance sheet, in other words, cash positive. Of course, the stake is not unlimited but capped at, dependent on the user's accomplishments, below 10,000USD. One more thing on this, decentralized work, as of now, will have a higher “STABLE” profit span than anything else accessible to the masses on a global scale apart from table coin returns. Not everyone can or wants to invest in IDOs or favors selling skills on Fiverr via whiteboard animation. We are building a more comprehensive exchange of merit-based value staking.”

What’s next then? 4rd Workdrop is running, so keep up the good work and join the Twitter Program. New features are to be disclosed to increase your earnings and engagement: We reward Hard Work and Loyalty. There´s plenty more to come, so stay tuned!

Malte Christensen, CEO of DAO Labs, reveals everything about Workdrop. 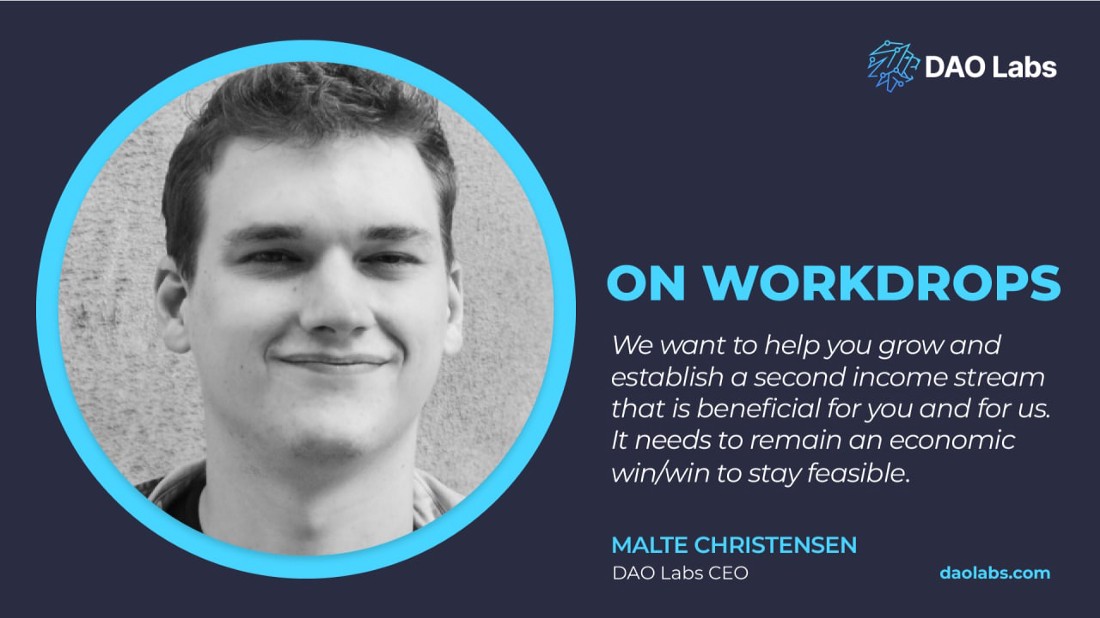